Monaleen N.S get active for Cliona’s in memory of Ciara McCarthy

Monaleen N.S get active for Cliona’s in memory of Ciara McCarthy

Ciara Mc Carthy was a pupil of Monaleen N.S. when she became ill and despite a brave battle  she passed away in March 2013 when she was 7 years of age

Since 2016 the school have selected Cliona’s to be the beneficiary of their activity day for the junior pupils,in memory of Ciara and not even COVID19 was going to put a stop to their efforts this year. 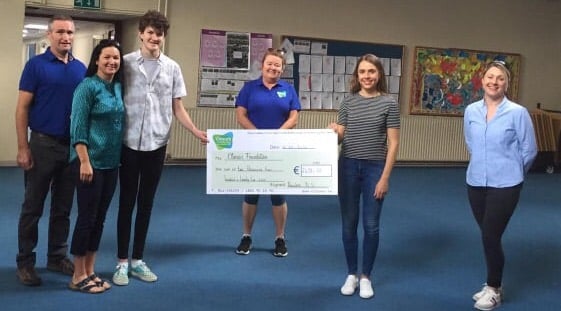 A timetable for daily activities was devised across all age groups which pupils & their families were encouraged  to complete, send images in to the school and also donate to Cliona’s. There were daily messages of encouragement across  the schools Social Media platforms from  the teachers & also former past pupils of the school.

It was a fantastic success  across all age groups with some wonderful videos and images being shared and the fantastic amount of €2,425 being donated to Cliona’s by the pupils, their families & the teachers.

This bring to a phenomenal  €12,195 the total amount raised by Monaleen National School for Cliona’s over the past 5 years in memory of Ciara Mc Carthy which we really cannot express our gratitude enough for.

YOU HAVE MADE A DIFFERENCE