Approaching the 20th anniversary of his kidney transplant John Loftus is a man showing no sign of slowing down. John  has always been noted for giving back, using his uncanny ability of innovation and reinvention and combining these qualities he came up with the novel idea of walking  100,000 steps in the week starting on Monday 11th May . This was while self isolating, keeping safely within the 2km radius from his house. and raising funds for Cliona’s. John was supported in his daily challenge by his wife Trish, daughter Tara and grandson Jack. 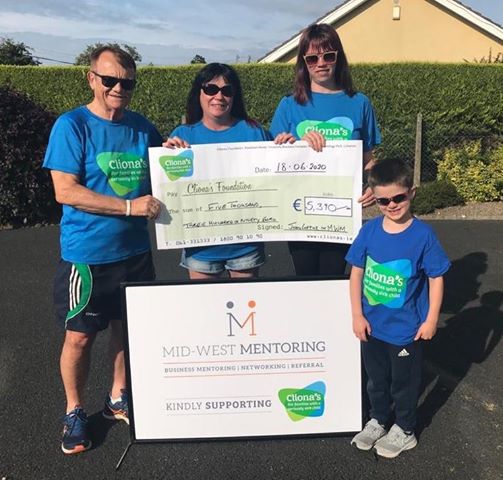 This fantastic crew exceeded their own expectations  completing 2.8 million steps collectively and raising a fantastic €5,390 for Cliona’s Foundation

” While we know that John when he sets his mind to something does not hold back we were absolutely blown away by the efforts made by everyone involved and the monies raised ” said Co- Founder of Cliona’s & member of the MWM Group Brendan Ring . “John recognised that Covid 19  was going to have a significant impact on our funding stream with the cancellation of a number of events and he along with the super MWM group really stepped up to the plate for us . The money raised will help us support 4 families who are struggling with the non medical costs of caring for their seriously sick child and will make a huge difference to them ”