Rory has landed in Dunnes  Stores nationwide following a close collaboration between  Dunnes Stores and  Cliona’s which saw Dunnes Srores input on design, and then develop and ship this wonderful soft toy to their shelves just in time for Christmas

DUNNES STORES – MAKING CHRISTMAS FOR EVERYONE

With a downloadable sleep story voiced by television presenter & business owner Suzanne Jackson, you have the opportunity to purchase this limited-edition special toy supporting families with sick children, just in time for Christmas. 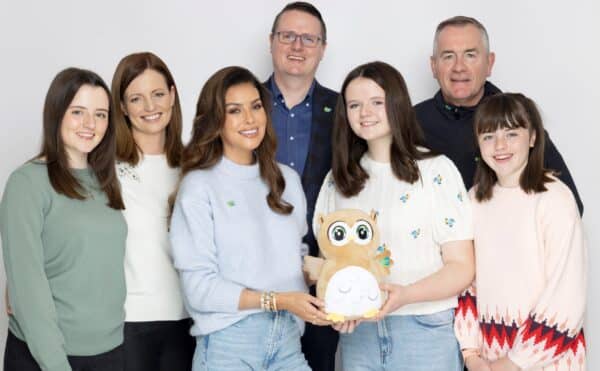 Suzanne Jackson joined CEO of Cliona’s Foundation Brendan Ring and the Delaney Family from Carlow to launch Rory, a very special toy which helps children to manage their anxiety by teaching them a unique breathing meditation. 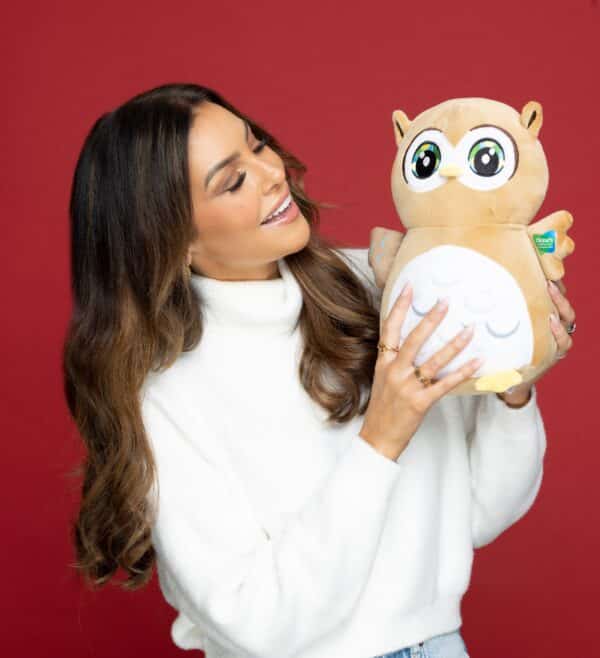 The inspiration for Rory came from Maurita Delaney, who had first-hand experience of the impact of anxiety on children. Maurita is a Chartered Physiotherapist and was seeing a number of children present to her practice with physical issues, but it became clear to her that the underlying issue was anxiety.

The pandemic brought its issues and for some children the ability to calm themselves down to get to sleep at night was non-existent.  Many had to have one of their parents beside them to feel safe enough while they went to sleep.  Maurita believed that so many families were dealing with an anxious child so came up with the concept of Rory.

The Owl’s eyes can be used as a tool to teach children to focus on deep belly breathing before sleep. This can be a skill for life; potentially giving children a tool to help manage anxiety both now and as adults. Cliona’s Foundation exists to help families, so there is a deep connection between the idea of Rory and the families Cliona’s work with.

Maurita and her family have been involved on previous projects in aid of Clionas Foundation with Dunnes Stores, who have supported Clionas Foundation for the past number of years.  The relationship began through Maurita’s daughter Keeva whose book “‘The Dolls Complaints” raised c.€65,000 in Dunnes Stores for Clionas.  Dunnes Stores stepped up again and generously agreed to develop Rory with their suppliers.

Rory will be sold in all their stores nationwide with 100% of the proceeds of €8 gong to Cliona’s. We are truly fortunate to have Dunnes Stores bring Rory to life and raise money for our Charity in this way.  We must offer a massive Thank You to Dunnes Stores!

We are delighted Suzanne Jackson has come onboard to be the Official Ambassador for Rory . She has also recorded the Rory guided meditation which can be listened to  and downloaded below and will go ‘hand in hand’ with the Owl and teach the breathing technique.  The story was written by Maurita’s daughter Sarah with some input from her sisters and cousin.