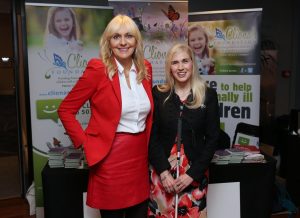 Miriam O’Callaghan and visually impaired runner Sinead Kane were in attendance with event charity partner Cliona’s Foundation at the All Ireland Business Summit in Croke Park on the 6th of April 2017. where both encouraged everyone to join Sinead who will be running for Cliona’s Foundation in the Barringtons Hospital Great Limerick Run on the 30th of April.

Sinead Kane. is the first Irish female  and the first visually impaired athlete to do do the 777 challenge which involved running seven marathons on seven continents in seven days.

“It is just fantastic that Sinead has agreed to run the Marathon for Cliona’s Foundation said Terry Ring, founder of Cliona’s Foundation  We met her recently at the launch of the All Ireland Business Summit in Croke Park and having spoken to her about the work we do she said she would love to do something for the Foundation

We subsequently thought why not ask her to compete in the BHGLR, thinking it may be a long shot. But she agreed without hesitation for her and her guide runner John O Regan to sign up for Cliona’s Foundation.”

“Because I have been helped by so many people during my life I always try to give back to those that need support as much as I can. I really like the work that Cliona’s Foundation do and I want to help them raise awareness of the need, the support the foundation provide and in the process help raise funds to allow them continue their invaluable work”. I won’t be going for a Personal Best in this marathon, so will be running a nice training /leisurely pace and would encourage as many as possible to run with me in support of Cliona’s Foundation”

Cliona’s Foundation would love if you could go the extra mile for children with a life limiting illness and either run the marathon with Sinead Kane or the half Marathon or 6m in support of the families we support . Even Companies that are competing in the “Fittest Company challenge “could also run a leg of their route with Sinead .