Cliona’s Foundation were thrilled to come out joint winners in the 2019  National Aviva Broker Community Fund  following a presentation to the judging panel in Dublin recently.

Aviva  launched the Aviva Broker Community Fund in 2017 to collaborate with their Broker partners in identifying local charitable and community causes that will make a difference in your community.

in 2019  Aviva awarded a total of €69,000 to over 40 charities and Cliona’s Foundation was a recipient of €1,000  Given the level of engagement received from the broker community and having listened to the impact that the funds would have on the winning organisations, a decision was taken to increase the funding to a nice round sum of €100,000 this year.

Cliona’s was nominated by a number of brokers, but it was the nomination by Nolan & Partners Financial Advisers that was shortlisted to the final 5 and guaranteed a fund of €5,000 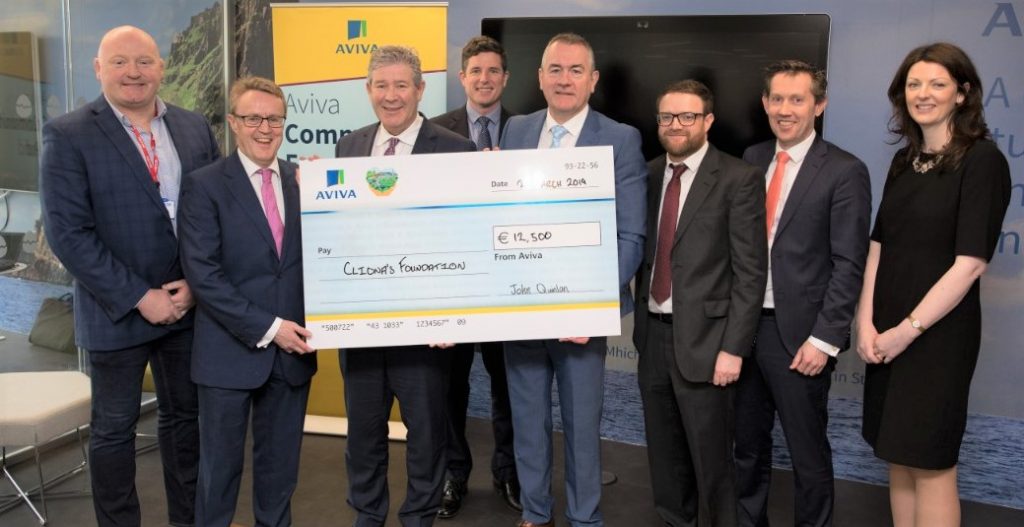 Each of the five charities shortlisted presented their plans to the independent panel of judges . ” We were delighted to know we were getting €5,000 ” said Co founder Brendan Ring ” but it was a bonus to be to be able to present to the panel of judges which included  including former rugby player, Bernard Jackman, representatives from Matheson and an executive from Charities Trust and to be in with a chance of the overall prize”

The outcome of the deliberations from the panel was that it was a draw between Cliona’s Foundation and another Limerick Charity  Irish Chamber Orchestra – Sing out with Strings for the €20,000 prize fund – with each us the charities being awarded €12,500.

“We were absolutely ecstatic ” said Brendan .”all of the other 4 charities are doing amazing work so it must have been a very close call. But this money is just so welcome and will enable us  help  8 of the families on our waiting list. Each of these families are struggling with the financial costs of caring for their seriously sick child so the monies they will receive will alleviate some of the stress they are under . To be nominated and recognised on a national stage is also a great boost to us. ”

Cliona’s Foundation would like to thank everyone involved in this very generous fund and in particular Paul Cuddy of Nolan & Partners Financial Advisers and also the other Brokers Metis Ireland and  O ‘ Malley Griffin who also nominated us.