Our Families : Tracy and Brendan McGinnis

Our Families : Tracy and Brendan McGinnis

We want to sha 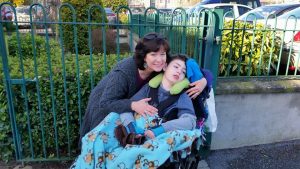 re with you a piece on one of the families we have been able to help and we thank them  for sharing their story with us. The McGinnis family story highlights the struggle familes face in caring for a sick child but also how much Cliona’s Foundation support means to them and the difference it can make

When Brendan McGinnis was born, doctors told his mother Tracy  he was perfect.  Today the brave 11-and-a-half year-old is severely disabled, suffering from epilepsy, scoliosis (a spinal deformity) and lung disease.  Mum Tracy, who wanted to tell their story to pay tribute to Cliona’s Foundation, said a common virus that affects 80% of the population by the time that they reach 40 years of age attacked Brendan while he was still in the womb.

“At first Brendan seemed perfect, everything about him looked normal.  But when he was examined at two weeks of age, doctors discovered he had microcephaly.  Microcephaly is an extremely rare condition that causes a child’s head to be smaller it should be for stage of development. This congenital condition is also associated with incomplete brain development.”

Tracy soon discovered this was just one of the health problems caused by Cytomegalovirus CMV, a common childhood illness that she caught while pregnant with her son.  Tracy said:  “Cytomegalovirus affects most people in their life.  In fact doctors believe 80% of the world’s population catch it by the time they reach 40 years of age.  It’s a very common childhood illness too.  Most people presume they have flu because the symptoms are similar, you run a temperature, have aches and pains and you feel sluggish.  But if you’re pregnant when you catch it there is a one in three chance that your child will be affected.”

“Cliona’s Foundation has been a fantastic support.  The funding they have given me has helped me to buy groceries, pay the electricity bill, pay rent, buy kerosene for my central heating – Cliona’s Foundation literally helped me to survive. It’s very expensive having a child in hospital, between parking charges, buying food in the café as the hospital obviously don’t provide food for parents, and then paying a childminder to look after my other son Declan, who is seven. In fact at one point Crumlin Children’s Hospital ended up admitting Declan to hospital so that he could stay with me and Brendan as I had literally nowhere else for him to go.”